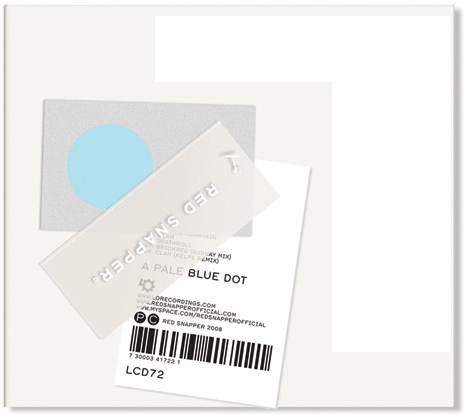 The album was recorded live in concert with Darius Kedros on mixing/dub duty and live in the studio with Tim Holmes of Death In Vegas. New sax (and clarinet) man Tom Challenger brings back the edge to make these recordings truly sizzle. Anyone who has caught them live will know what a unique and powerful live band they are. A Pale Blue Dot is both document and mission statement. The album also features radical new re-interpretations of 2 of the tracks, one apiece by Kelpe and Subway, stretching the future jazz vibe riiiiight out. So there you have it an album that feels so good, so right, so now.

For anyone who needs it, here’s a very brief recap on the Snapper to date:
1994 Red Snapper formed in Hammersmith, London / release 3 ep’s on Dean Thatcher’s Flaw label / After show at Glastonbury they sign to Warp records / 1996 debut album ‘Prince Blimey’ released / remixes for Garbage, David Holmes, Lamb, Sabres Of Paradise etc / 1998 ‘Making Bones’ album released feat MC Det and Alison David / tours with Massive Attack, Bjork and The Prodigy / 2000 3rd and final album for Warp ‘Our Aim Is To Satisfy’ released / Red Snapper decide to take a break / 2003 Lo recordings release the ‘Red Snapper’ album, a collection of unreleased tracks with live versions and remixes / an album of mixes released by Lo under the title ‘Redone’ / After 7 years off Red Snapper get back to it and play the Big Chill festival / dates all over Europe / new recordings for ‘A Pale Blue Dot’ album.
More info at: www.myspace.com/redsnapperofficial